Buses, Beechworth, Bright and a bit of Beer 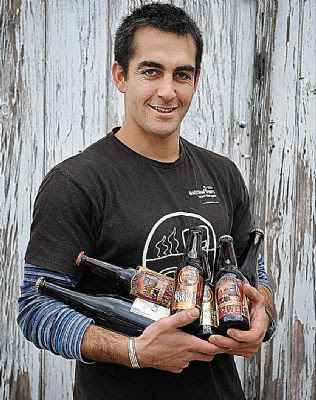 On paper it all innocent enough. A weekend bus trip to historic Beechworth in Victoria’s North East on Saturday and a casual lunch visit to Bright on the Sunday for lunch.

This trip, however, was not conducted on paper but in the form of three minibuses filled with Ale Stars and Local Taphouse regulars and the destinations included two of Victoria’s finest craft breweries and Beechworth’s oldest hotel so ‘innocent’ was suddenly looking like a forlorn hope.

Add to the mix three 2-way radios, 3 dodgy Op Shop Bus Driver uniforms and a healthy dose of shenanigans and the trip began to take on more of a Footy Trip feel.

In short the trip had everything. From stunning views and limited release brews to bargain hunting and Bogan spotting – we even had real beer tears and lost a couple of our number along the way.


With all passengers (and buses) accounted for we set off in convoy for Beechworth some 300 kms away. Trivia questions and a beer version of ‘Spotto’ were on hand to keep ‘the kids’ amused on the 3 & a 1/2 hour journey but it wasn’t long before it became clear that Fun & Frivolity would be the order of the day. An exchange of paperwork at the first set of traffic lights kinda set the standard.

And we hadn’t had a beer yet.

Communication between buses via 2 way radios was arranged so that stops could be co-ordinated, road conditions passed on and, most importantly, so that no-one would get lost. Two outta three ain’t bad. Green Leader (Guy) headed us along the Hume until the first Wangaratta turn off where he took the exit before Amber 2 (Prof) could get on the mike and say “DON’T!!” Silver Fox (Justin) had a big call to make; follow the Prof’s call or head off with the tear-aways.

A call was put out quickly (before we lost radio contact) to let the Lost Boys know that we would wait on the Great Alpine Road while they took in the unplanned sights of Wangaratta township. We expected to catch them up in around 10 minutes. That’s ten minutes in normal time, which is actually twenty minutes in “Wangaratta is flooded and we needed to take a bit of a detour time”.

Two important decisions were then made. JJ and GG allowed the Prof to change his call sign to ‘Lone Wolf’ and also that ‘Lone Wolf’ would take the lead from here on in. A relatively relaxing and uneventful jaunt into Beechworth saw us head in convoy down Ford Street and around into the back carpark of Bridge Road Brewers at – you won’t believe this – exactly 1.15pm as per the itinerary. Things could really only go pear-shaped from this point. 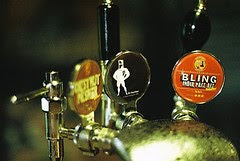 While the thirsty travellers availed themselves of several of Ben Kraus’ splendid brews the bus drivers drove the convoy to Latrobe at Beechworth which, despite being no more than 10 minutes walking distance from the brewery, took us half an hour, 2 laps of town and a visit to the Information Centre to locate. I should have led us off. Once the group was checked-in and the luggage dumped en masse in the closest room, the drivers headed back to Bridge road Brewers to begin the Bus Drivers’ favourite game, “Catch Up”.

By the time our scheduled departure drew near we realised we were 2 short of a full tour as some friends of James had yet to surface. A light knock on their door suggested they had wandered into town with half a dozen others but, when leaving time arrived and they were still MIA, a gentle pounding was applied to the door before the decision was made to leave without them. Afterall, a 6.6% attrition rate for a tour of this type is more than acceptable. 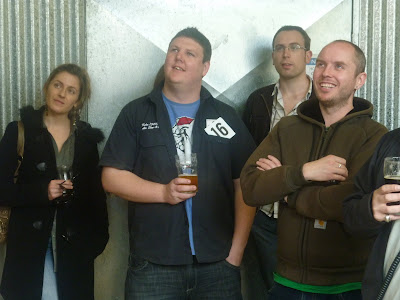 We made our way to Bright with a couple of fake indicator manoeuvres, a couple of ‘two-times-round-the-roundabout’ and more than a couple of sore heads. Beautiful sunshine greeted us, along with Scott Brandon from Bright Brewery and after a tour and some more tastings we had lunch and a special dessert – some ‘experimental’ chill distilled Fainter’s Dubbel from Scott’s cellar. A cracking warm and rich sherry-like brew but not one for those with a four hour drive to look forward to.

As we wound up our trip with the obligatory ‘after’ group photo (including two chairs with Bright Mini Kegs to represent our fallen comrades) we bade farewell to Bright and pointed the wagons homeward. Carefully planned piss stops, sorry Pit Stops and pre-arranged drop offs were confirmed and we were away. These plans were all soon discarded as we stopped off at the Milawa Cheese factory and several bladders proved to be less iron-clad than their owners had given them credit for. 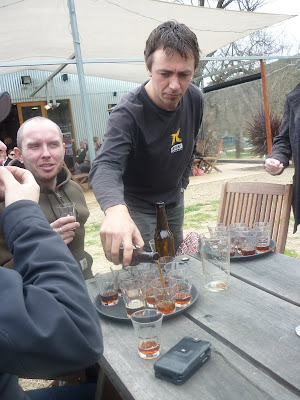 The trip concluded with some absolutely text-book sensational co-ordinated passing moves (geez those 2 way radios were worth the effort!) and some very entertaining rounds of Spot The Bogan before we approached the lights of the city. Before we began to shed passengers along the way into St Kilda a straw poll was conducted to see which of the many beers sampled over the preceding 48 hours was the favourite.

The Bridge Road B2 Bomber and the Bright Staircase Porter were well supported but the clear winner was the Bridge Road Bier de Garde on handpump at Tanswell’s commercial Hotel. As too what was the funniest/scariest/most embarrassing moment from the weekend ... well, you know, what happens on tour STAYS on tour!

Needless to say preparations are being made to arrange the next Ale Stars Road Trip with various destinations and durations being considered. I’m all for returning to Beechworth and Bright again and I’ve even offered to drive the big bus.

If nothing else, we owe it to the two we left behind to at least make a half-arsed effort to find them! 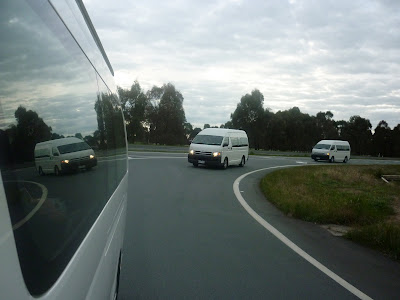 P.S. A huge thank you to Big Kelv for his sterling job of Wingman. Shotgun Rider, Navigator and, most importantly, Hanging-Out-The-Window-Photographer on my bus. And a special shout-out to all my passengers for their company and friendship. We really must do it all again. Soon.
Posted by Beer Blokes at 13:57

Thank You 'Anon' ... now that the secret is out I need suggestions from readers for Birthday Beer.

Prof (Older but no wiser)

Cheers, Professor. Have a great birthday!

Prof I have to pull you up on a not so minor detail... It was the Silverfox who chose to take the scenic 'Wang' route - not I the Greenhound! I will concede, however, that I chose to back the wrong horse!

Great write up Prof, definitely must do it all again soon! Even if we have to use the retrieval of the fallen two as an excuse! Just don't forget the Rodney Rude CD this time!! :)

My most sincere apologies Greenhound for suggesting that you would have led us astray! I must have been thinking about the time you got lost on the straight driveway at the accomodation!!

Thanks Mel - next years trip will definitely include Rodney's complete unabridged back catalogue on the CD player. I'll book a spot for you guys now.

That line sums it up perfectly! Honourable mention to the Beechworth Sweet Shop and the Bakery for r*ping our wallets also.

Thank you all for a fab weekend - absolutely cannot wait for the next one and the accompanying hijinks!

Sounds like a very memorable trip in which you discovered some of the delights of Beechworth. Hope to see you back in the not to distant future.