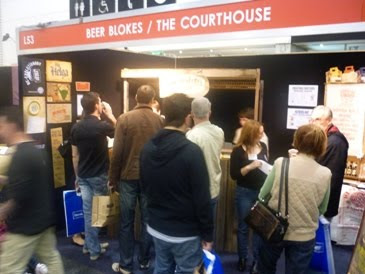 The last week of August saw the Beer Blokes join beery forces with The Courthouse Restaurant in Berwick to take the word on Good Beer to the masses at The Herald Sun Home Show and Garden Expo.

For those unable to attend, we presented a Beer & Food Experience in three parts. Showcasing three of Matilda Bay’s finest brews, we began with a nice crisp Munich style lager, Big Helga, and a brief introduction to Craft Beer. Tim (Chef & Owner of The Courthouse) then showed the crowd how to use beer as an ingredient in a pie which was then matched with a Fat Yak Pale Ale. We finished with the seemingly incompatible Dogbolter Dark Lager paired with a little chocolate mud cake. The fact that not a single crumb or drop was left behind makes me guess that the matches were a hit!

We were thrilled with the response to both our show on The Wine & Dine Stage and to the crowds we had visit us at our stand. Attendance at The Home Show was expected to be around 40,000 and it felt as though, between us, Tim and I served nearly all of them samples of Matilda Bay beers, along with some selected offerings from some of Victoria’s finest Craft Breweries. And when I say ‘we’ of course I mean ‘we’ plus our very dedicated support staff of Jess, Carol and Sam who helped us out – particularly after each stage show when a mass of ‘Beer Hunters’ headed over for some more of what they saw on stage! 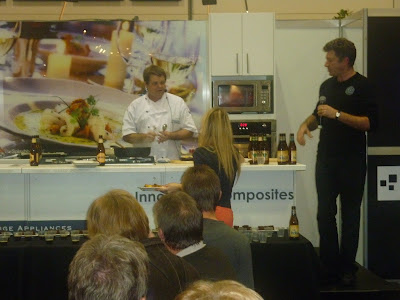 We are all now totally exhausted but absolutely thrilled that so many people were keen to find out more about our burgeoning Craft Beer scene and were so willing to try some beers that were, until now, a mystery to them. We are busily preparing orders for shipping and selecting some special Craft Beers from around Australia for our visitors to enjoy. Needless to say there are more than a few Dads who will get a very nice surprise on Sunday September 5th!

A special thanks to Tom and the crew from Mountain Goat for your help – there are now heaps of little kids with Goat stickers on their bikes! To Ben from Bridge Road Brewers and all the others who helped us with posters and stuff to make the stand look ‘homely’ an extra big thank you. And the biggest thank you of all to Scott and the crew at Matilda Bay for the loan of the bar which made the stand look welcoming and gave the punters something solid to lean on while they learned all about good beer!