I have to admit that I was going to begin this post by telling you how many Beer Dinners I’ve hosted at The Courthouse Restaurant over the last 6 years but I can’t actually remember the total and I can’t find all the menus that I’ve kept which would have given me an idea at least.

Let’s say that I reckon it’s about twenty.

My point was going to be this; each dinner has featured at least five and sometimes six and one time seven beers and I have only used two beers more than once (Schofferhoffer Kristallweizen and Bridge Road Brewers Australian Ale) and rarely use more than one beer that we already have on the Beer List, so it’s fair to say that we have always tried to give value for money.

But, to be fair, I have generally had to cater mostly to a market that, while willing to try something ‘new’ is not one to really embrace anything ‘different’, and so particularly early on we had to use a more mainstream standard of beers to make sure we didn’t scare too many away. After all, you don’t win a Grand Prix on the first lap.

But, as the base of regular supporters has grown (I’ve done Beer Dinners early in the piece with a table of two and a table of four and, more recently for 56 people) I’ve found that I need to ensure that the maturing palates are not disadvantaged. The beer selection has consequently matured to include lesser known styles and unfamiliar brands including a growing emphasis on Australian Craft Beer. 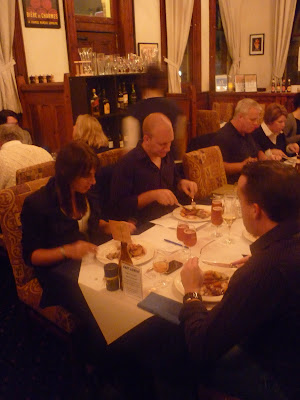 But the last Beer Dinner I took things a step further. Not only were the guests introduced to the mysteries of Dark Lager in the steely form of Matilda Bay Dogbolter, we then crashed their palates with a very hoppy Anchor Liberty Ale and then completely changed their perceptions of what beer CAN be by finishing the night with a Bridge Road Brewers Megachile Pluto Braggot. As you can guess there were so many foreign words in that one that it took us ten minutes just to introduce the beer!

Braggot, that Ale/Mead hybrid so well loved of the Medieval Britons, was recently reintroduced to the craft beer scene by Bridge Road Brewers Nardia McGrath (amazingly and coincidentally at the same time by Red Duck Brewery as ‘Ugly Duckling’ at 14%!). The Bridge Road Braggot uses a rather generous 85kgs of Beechworth Red Stringy Bark honey in its 800litre batch and this gives it warmth and mellowness and a nice big hug with its 10% alcohol level.

And here’s the point of this whole post. The Braggot went down an absolute treat. The response was terrifically positive and, considering the guests had already had at least four beers and four courses by then, there was very little left undrunk. Beer, that is, not people. Although, as I recall, there were very few people left un-wobbly! But happily so.

So from here on in I need to readjust my thinking when I’m standing in the beer aisle choosing the beers to suit the dishes I have in mind. While I still have to make sure that the beers fit into the per-head budget I reckon I can throw in at least one – and maybe even two – beers that are outside the comfort zone for the average drinker.

I might even call it The Braggot Principle. Thanks, Nardia.

Oh, and Ben? I might grab some B2 Bomber for the next Beer Dinner on October 15. I know you guys are still fighting over whose beer has the most positive review! You might even like to invite yourself down and I’ll make it a Bridge Road Beer Dinner...?
Posted by Beer Blokes at 16:08