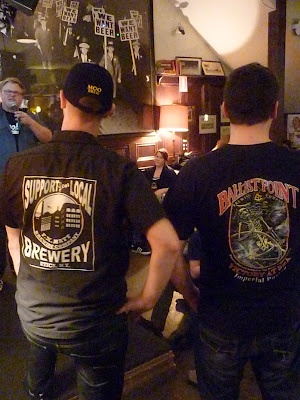 It was a different Ale Stars session last night as 65 gathered downstairs at The Local Taphouse in St Kilda like the bear that went over the mountain - to see what they could see.

Ale Stars, you see, usually has a theme, be it a beer style a beer type or beers from a particular brewery. But this time things were different. In fact, I bet if you asked a thousand beer lovers if they’d like to pop over for a ‘slide night’ you’d get a thousand answers ranging from “I’m washing my hair” to “piss off you idiot”.

But, as I said, last night was different. The slide night was being presented by The Beer Ambassadors. 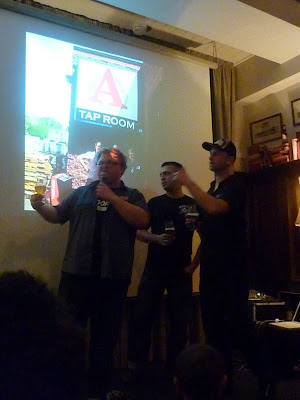 The Beer Ambassadors are Barney Matthews and Miro Bellini from Fed Square must-hang-out, Beer Deluxe and Road Goat, Tom Delmont. And their slide nights are well worth attending. Combine it with a big group of interested onlookers and a fist or two full of very nice American Craft Beers and who could say no, really?

Of the 65 who did say yes, few had any real idea what to expect. Most knew of the boys’ recent trip to the States where they set out to visit 25 breweries and bars in 25 days and sample the best of what that burgeoning Craft Beer scene has to offer but there was a little mystery as to how they would make an Ale Stars night out of it. As it turned out, the boys themselves didn’t really know, either.

What we got was a rollicking night filled with tales of travel and friendships, of mountains and medical emergencies and 200kg Mexican bedmates. You just had to be there.

The beers were different to what we were used to as well. Not that were exact replicas of the beers that the Ambassadors sipped in The States, but representative nonetheless. A Little Sumpin’ Sumpin’ Ale from Lagunitas got things going and for those in the room (most of us) who had not had an American style wheat beer were divided on this one. Love it or leave it seemed to be the two camps. 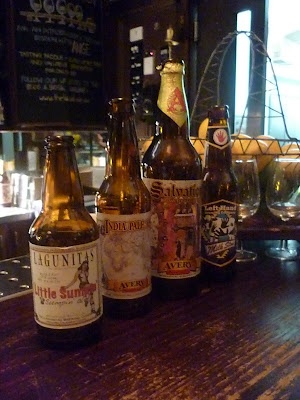 Ale Stars had been treated to an Avery Beer when we tasted Brown Ales and this time round we had their flagship IPA which kept things ticking at 6.3% and accompanied the Ambassadors tales of foaming fermenters and Ron Jeremy branded production lines. Don’t ask, I’ll tell you when we next catch up for a beer. But let’s just say it had something to do with ‘packing the most boxes’ ... ooops, may have given it away there. [CAN WE EDIT THAT OUT IN POST? Prof. YEP, THINK SO. Ed]

Salvation then appeared in the form of Avery’s Belgian Strong Pale Ale of the same name and, at 9% it would have to be something pretty drastic that you were being saved from. Warm and rich and spicy and coincidentally sharing its name with a Russian River Brewing Company beer. In a sign of where the Craft Beer scene in The States is at, the two breweries have combined rather than collided to make a joint-blended beer called Collaboration – not Litigation. 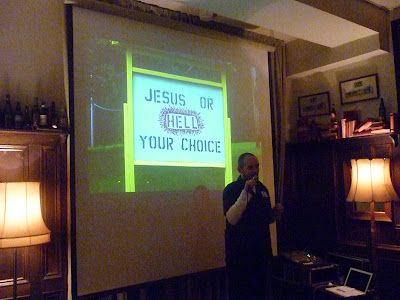 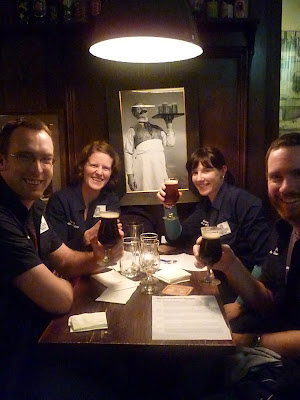 We finished the formal tasting with a Left Hand Milk Stout which was very much a desserty end to the savoury offerings enjoyed to that point. The Beer Ambassadors closed out the evening with a terrific story that seemed to require selected edits from each of the boys in order to fill in all the missing details that each suffered from. Let’s just say that if you ever find yourself lost, looking for a taxi on a strange corner in a state of fairly severe inebriation, you could do worse than to wake up on a sofa next to a rather large Mexican named Purnell who, until that very minute was a complete and utter stranger and who, as it turned out, didn’t violate you in any way. That you can remember.

That’s a trip worth taking. 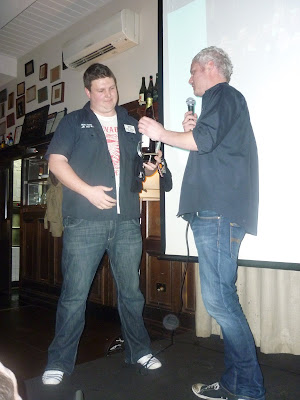 And just a quick shout-out to our good mate and long time Ale Star, Kelv, who is heading off to conquer Perth and drink a lot more of the WA Craft Beer a lot fresher. A top bloke and a loyal mate and true friend of Craft Beer. His last regular Ale Star event was last night's and I'd like to take the opportunity to wish him all the best and to thank him for his company on the journey so far. Cheers and Good Luck mate.
Posted by Beer Blokes at 17:15

Email ThisBlogThis!Share to TwitterShare to FacebookShare to Pinterest
Labels: ale stars, The Beer Ambassadors, The Local Taphouse, US

Oh nicely done again Prof! Thanks for coming along and listening to our shenanigans! PS It was worth the parking fine I found on the Smart next morning, oh well.

On the scale of "Things that you want to avoid" I still think a parking ticket after Ale Stars beats waking up next to a 200kg Mexican. Unless it's a burrito ... hmmm?