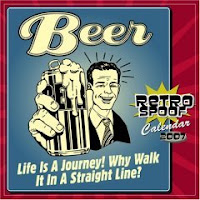 Due to the overwhelming success of the first Beer Myths segment – that is to say, I had a jolly good laugh writing it- please enjoy part two of our informative series; That’s Bullshit, Isn’t It?

Q. My homebrew tastes like cats piss. How do I fix this?
A. Don’t put any cats piss in the fermenter during brewing.

Q. I don’t get any bubbling through my airlock. Should I just give up on homebrewing?
A. With that attitude, yes. And quickly. There is no room for sooky la-las like you in this caper. Airlocks often don’t bubble as the expanding air escapes through the seals of many fermenters and you needn’t worry. It just proves that you shouldn’t use your airlock to judge when your brew has fermented out.

Q. I like the girl on the Hahn Super Dry advert with the big boobies.
A. Again, not a question but I am happy to let this one slide. She seems a good sort and certainly better looking than the one who gets fish-slapped in the gondola.

Q. What is the difference between a Trappist beer and an Abbey beer?
A. Very good question. Trappists were a very annoying family who ran around the alps singing all the time ... no, wait, that was the Von Trapps. Trappist beers are made in monasteries – sometimes by monks and sometimes by lay brewers – and there are only six monasteries permitted to use the designation Trappist. Abbey beers are those which have been made previously in monasteries, but have since been made by commercial breweries which are granted the right to label them as monastery beers. The Trappist beers come under the category of Belgian specialty ales while others like the Leffe range include blondes, reds and darks. Beer, that is, not chicks. I don’t think the monks are allowed to have chicks. Not in the monastery anyway.

Q. What does the German word Löwenbräu mean?
A. You don’t specify wether you mean a literal translation of the name or the ethereal plane to which a drinker of this fine brew may be transported spiritually while contemplating the centuries of brewing that have culminated in the creation of this nectar. If you are referring to the name it means “Lion Brewery” according to Willie Simpson’s The Beer Bible and “Lion Beer” according to another source which I can’t find just now. Löwenbräu was brewed for a time in Australia. Not to be confused with the TV show ‘Big Brother which is Lower Brow.

Q. What is a lager bomb?
A. No, this is not some new wave cocktail made from beer, although, in a funny way I guess it is. A lager bomb is the biological process by which the male body completes a heavy night of drinking. Occurring some time during the daylight hours of the following day, the lager bomb is the body’s special way of reminding the drinker of the quality of the previous night’s session. It is also the body’s way of rendering the toilet unusable for anything up to two days. Not to be confused with the Jaeger Bomb which is a way of getting half drunk twenty-somethings to part with to part with large amounts of cash for a drink marketing trick that lasts all of two seconds and doesn’t taste very nie either.

Q. Did you find that reference to Lion Beer yet?
A. Yes, it was in ‘Beer. Slabs, Stubbies and Six Packs’ by Ben Canaider and Greg Duncan Powell. Thanks for asking.