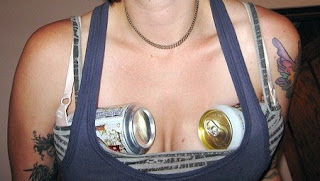 I’m not all that politically correct. You may have gathered that from actually reading some of the stuff that makes its way from my mind to this blog. Just out of interest, what gave it away? Was it the smattering of boobies throughout the posts? The back-handed compliments given out to men who drink white wine at parties? Maybe it was my propensity to continually use words like ‘dickheadedness’ ‘poofter’ and rarely use words like ‘propensity’? What’s that? It was the boobies? Yeah, they’re my favourite, too!

Anyway, the point is that there is far too much emphasis today on speaking so as to not offend anybody at all ever. Ever. Now, I am a firm believer in the old adage that the man who never made a mistake, never made anything and, to this end, I try to use this blog to make LOTS AND LOTS AND LOTS AND LOTS OF THINGS!! I like to think I am doing my bit. Giving the male of the species a voice and the chance to share blokey things like feelings without having to touch each others bottoms.

Another crowd of blokes who are on the same page in this respect are the ones who hang out at a place called Baron’s Brewing Company. Not a brewery, in that they don’t own the equipment to brew beer in, but the makers of some very fine beers nonetheless. I have mentioned them before in these pages and have enjoyed many of their range of beers which include a standard style Pale ale and Lager as well as some beers at the more ‘experimental’ end of the beer world which are flavoured, infused and otherwise enhanced by the addition of native products. I will give you a link to their very well constructed site later, but for now, concentrate. This is important.

Baron’s are launching a Save The Males campaign. Neatly tongue in cheek, it has already raised the ire of the namby-pambies who would rather see us all in grey sack cloth eating water crackers and sipping cold tea and not talking about boobies and it has the support of a cleverly delivered marketing package. Lion Nathan stepped across a similar path recently with their Super Dry ads warning that poofy roller blading and sucky love songs could damage your delicate beer but this is different. For a start, Baron’s beer is very, very drinkable and the range provides a good beer for nearly every taste. Scondly, the ads feature very, very large dongers being chased and intimidated by very, very large ‘gynnies. Funny stuff.

The boys have also launched a competition to see who can come up with a good old fashioned PC incorrect video to support the cause. Check out the site at the address below and see if you can seek out some of their beers, too. Apart from the usual reliable like Cloudwine Cellars, Purvis’ and Sword’s Select you can now get a couple of lines from Dan Murphy’s.

Now, if you’ll excuse me, I need to get out and get some Baron’s beers and then make fun of some blokes carrying man-bags. And fellas, they’re purses, despite what you think.