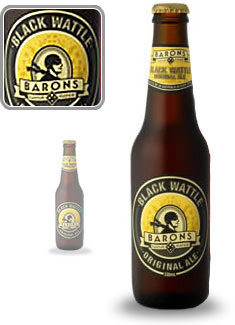 It really did happen, but it was also a great excuse to use all those ‘B’ words in a title!

Barons Brewing Company, who were featured and promoted late in November, have taken out the top gong in the JD Wetherspoon International beer festival last week.

Barons was invited to enter and represent Australia in the international category and offered the Barons Black Wattle Original Ale as their signature brew. A very nice amber ale flavoured with native spices, the beer was selected ahead of three other overseas contenders from California, Denmark and Tokyo, and a total of 50 nominations for best beer.

The competition was run in 717 Wetherspoon pubs across the country and attracted votes from some 8500 punters so this was no mean feat, despite what some locals think of the ‘chain’ pubs and the anti-sentiment of some CAMRA factions. I would be interested to hear fro my blog mates in Old Blighty as to their thoughts on the ‘validity’ of the Wetherspoon festival. Either way, I am backing Barons as a legitimate winner, so there. And here’s why ...

Black Wattle Original Ale has been floating around as a bottled brew for about three years and when head brewer Richard Adamson was invited to brew a batch at the prestigious Marston’s Brewery at Burton-On-Trent he specifically designed a version of the Black Wattle that would savour the ‘real ale’ experience – open fermentation, bright filtering, cask conditioning and hand pumping – to ensure a genuine ale rather than a sort of native favoured Aussie standard beer. The local brew went through six different versions and some serious tweaking before being unleashed on the public. That’s brewing dedication, isn’t it?

In addition, the win has attracted some interest from local importers who are looking at getting on board the Barons Squadron and letting our mother country’s beer lovers experience these innovative beers.

I wouldnt put too much credibility into a JDW festival. Only tickers and tramps drink there. I made an exception to the rule just to be true to the native Barons cause.

I had the feeling that JDW were seen a bit like the McDonalds of pubs over there. Is it a 'bully boy' approach to who or what they stock, or is it more a case of just being a bit souless and not supporting the small brewers? Still, if they attract a large crowd (even if only tickers and tramps!) then their beer festivals must have some 'street cred'?Thanks for the comments, TimCheers,Prof. Pilsner

I think Mcdonalds is a good analogy. They are usually large soleless places and are more like drinking factories than pubs. They do tend to support smaller brewers and regularly have guest ales, but in general they serve them too cold. There are a few JDW's that are ok, the Knights Templar on Chancery Lane is ok as is the Crosse Keys in the City, but they are located in nice areas.
Back to Baron's, I actually liked their Real Ale version of the wattle ale. It must be the nicest thing to ever come out of the Marston's Brewery!