Ale Stars let their hair down. 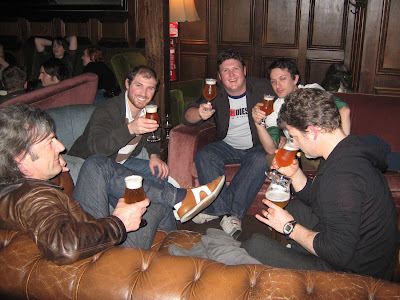 When you are attending a beer event that features a beer called Rapunzel, you have to take the opportunity to do the ‘let ya hair down line’ – so now that it’s out of the way, let’s go straight to the review.

How good was Ale Stars, hey!?! What a cracking night – sensational beers, iconic guest brewer, a great crowd and a new host with an amazing trivia quiz! Does it get any better than that!? Think not.

Seriously though, we did miss Shandy as I’m sure he missed us all. Taking a break from the hosting duties to prepare for the arrival of number two bub, Shandy allowed me to stand in for him – an honour and a privilege that I hope I did him proud. Nearly forty Ale Stars including a couple of new faces braved the cool Melbourne winter to warm up to some very lovely, but all very different, Belgian Blonds. And haven’t we all wanted to do THAT at one time or another?

Very special guest for the evening was Dave Bonighton, head brewer and founding Goat of the Mountain Goat Brewery who was there to ensure that his special limited release brew, Rapunzel, was introduced respectfully to the gathering. Dave, with Cam Hines launched Mountain Goat back in 97 and were one of Melbourne’s first craft brewers and have certainly proven themselves to be one of the most successful. Dave was on hand to lead us through the not-too-technical aspects of the style, although he could have got as technical as he liked – anyone know where the tech-foul BS bell went? Shandy, trying to handicap the Prof? Hmmmm?

We began with the Murray’s Sassy Blond as this seemed as good a place as any to begin. When you’re sampling Strong Belgian Blond ales, it’s nice to start with a 4.5% easy drinking starter as you know, at some point, you will need to ramp up the ABV to around 8 + and you don’t want to go too hard too early. Speaking of which, I have mentioned in previous Ale Stars posts that SUBS, or Sneaky Upstairs Beers prior to our 7 o’clock-ish kick off, have become a tradition. Well, it seems that not only are more and more doing it – and earlier and earlier – but we don’t even bother lobbing upstairs anymore!

While Murray’s Blond played along to the style tune well, it wasn’t until the Red Hill Belgian Blond hit the tables that we all realised that this style held some lovely wonders. A warmth of aroma, yeasty and fresh, a malt backbone of biscuity sweetness, restrained hop flavour and bitterness and a lively carbonation leading to a delicious dryness – this one ticked a few extra boxes.

This led us nicely into Duvel – the flagship Belgian Strong Blond and not just one of Dave’s favourite beers, but also the inspiration for his Rapunzel. This ticked all the boxes as well as turning the amp ‘up to ee-leven’. Brightly golden with a rocky foam that crowns the glass, Duvel has aroma and flavour and dryness and a yeasty punch set that it apart from the previous two. Carbonation and dryness that combine to refresh and invigorate, this was Belgian Blond as God meant it!

As Dave had admitted to wanting to attempt a replication of a Duvel, and had admitted to having visited the brewery at about the same time as the Duvel yeast found its way into his carry-on luggage, it seemed fair that we finished with his beer. It also meant that he had to stay til’ the end in the event that he didn’t like the new host. What everybody DID like, was Rapunzel. Dave led us through her story from conception through to creation and nobody was left wondering what a Belgian Blond COULD taste like. This one ticked every box and then drew in a couple more boxes to tick as well! True to style but also true to the Goat creed of Funky & Flavourfull.

The night finished with Dave sharing his brew with the winners of the trivia quiz, and it was good to see the winning team contained only one previous title holder. Personally, with a winning score of 8/15, I’m amazed that the quiz didn’t end in a seven-way nil-all draw! And it was all multiple choice! I blame the alcoholic strength of the beers we had. More on that in a later post.

My thanks to Justin, Guy and Steve for the opportunity to play host for a night, to Shandy for all the text messages he sent through the night and special thanks to Dave Bonighton for bringing a beery credibility to the proceedings that I could not even have hoped to achieve.

Sorry to have missed it, sounds like a top night! Catch you next month :)