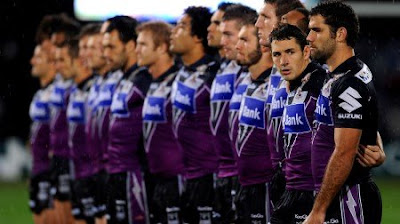 My recent trip with the eldest Pilsner to Canberra coincided with a Melbourne Storm home game. As a Premium member with reserved seats under the coaches box it is always tough to miss a game but attending the ANZAC Day dawn service at the Australian War Memorial was a worthy substitute.

The Saturday night game was against traditional rivals the New Zealand Warriors – a nice ANZAC celebration match – and recent clashes have been close and exciting affairs regardless of the teams ladder positions. Our room sat right above the very comfortable lounge and bar which held a few hundred drinkers and around eight big screen tellies.


The bar was packed with ANZAC Day revellers and the courtyard raged all day with the raucous shouting and cheering of another hundred or so at the two-up ring. I fronted the bar in the early afternoon and chatted briefly with the bloke behind the jump as soldiers, sailors and various suits poured into the place in a constant stream. “Busiest day of the year by a long shot”, he said as he chain-poured lagers with one hand, sorted change with the other and organised another bloke to change the Carlton Draught keg with a nod in that tap’s direction at the same time. 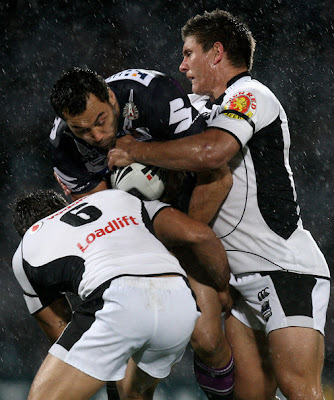 I noticed that the biggest of the big screen TVs was showing the NRL game between St George Illawarra and the Sydney Roosters with regular promos for the Storm/Warriors clash flashing across the bottom of the screen.

“Coming up next – the ANZAC clash between Melbourne and New Zealand!!” “Stay Tuned!!!” “Right after this match, we go straight to Melbourne – Storm and the Warriors!!” “They were mates on the battlefield, now they face off in a clash for bragging rights on the footy field!!” “Get a Crazy Frog ringtone for your mobile!! Your mates will think you ROCK!!!”

The first game finished and I whipped back upstairs with the eldest Pilsner’s dinner, wished myself luck for the boys and raced back downstairs to hook a good spot in front of the TV closest to the bar. The last station promo before the Big Game wound up and I decided on my first beer. I turned back to see NOT the Melbourne Storm, but a RUGBY UNION game. Rugby Union?!? That’s the game in which three blokes try to push two blokes up one bloke’s arse!!! What happened? Where’s the Storm!?!

I turned to the bloke at the bar to forcefully – but fairly – register my disappointment, with a small attachment regarding the reversal of the aforementioned channel-change when my eye caught a wide-screen view of the whole bar. The game showing was the Super 14 game between the New Zealand based Crusaders and the Canberra based Brumbies and there must have been close to three hundred blokes all glued to every screen in the joint.

And there was not a single neck to be seen among them.

I tucked my Storm hat under my coat and quietly went back upstairs.

The Storm and the Warriors drew 14 all after one of the most exciting clashes between the two teams in their 12 year history after two periods of extra time. The Brumbies managed to just get out of first gear to be handed their own arses 56 to 10. If there really is a God, he doesn’t live in Canberra.