Trivia, Tats and a little teasing 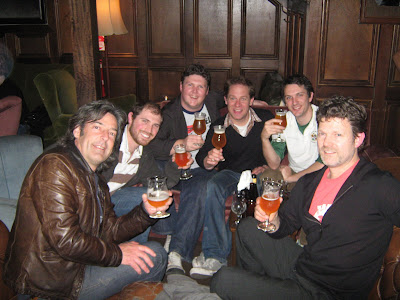 When you are asked to fill in for someone who has taken a role and stamped it with his unique style and personality and thus made it his own you know that there are only two ways to handle the challenge. Do it different – or don’t do it all.

Shandy had graciously allowed your own Professor to take the reins of the unpredictable charging beast that is Ale Stars and, truth be told, for a while there, I was as toey as a Roman sandal until I realised that the key was to be my own Beer Bloke and not try to ‘out Shandy’ Shandy. But I felt that it was important to recognise his contribution to ‘the brand’. Pay homage, if you like. Or, more truthfully, take the piss.
Shandy, The Local Taphouse St Kilda Ale Stars Czar (try putting THAT on a business card) has a magnificent tattoo on the inside of his forearm. It’s not one of those ‘Bogan Stickers’ like you see displayed at Fountain Gate Shopping Centre, nor is it a skilfully crafted work of art like fellow Ale Star Simon-Rob has, this is special and specific to him. It is his family name written in an ancient Celtic Code
Script. Now, to the unedu-macated it might look a bit like a Bar Code from a laser off the Enterprise, but it is actually a very nice piece of in and has great personal value to its owner. I decided that this was my chance to ‘raise a glass’ to my mate. 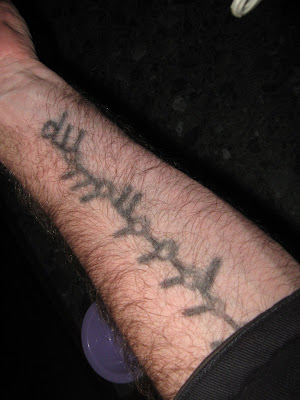 I also wanted to dispel any rumours that the trivia I presented in Shandy’s place was designed so that NOBODY would win, thus preserving my stature as Ale Stars Trivia Whiz. This is not true. In fact, I was SO generous in my attempts to allow EVERYONE to win, that I gave the assembled crowd ALL THE ANSWERS! That’s right, multiple choice, True or False and Odd One Out! Every answer was read out – you just had to work out which of the four was the correct one. For those who couldn’t be there and for hose who care here is round One – True or False. Write your answers on a bit of paper – don’t write in the space provided cos it takes me ages to clean the laptop screen. Good Luck!

1. The Pilgrims were landed at Plymouth Rock because the Mayflower was running out of beer
________

3. During the Great Depression, Cascade Brewery handed out free malted barley extract to the unemployed.
_______