I'll have a beer please 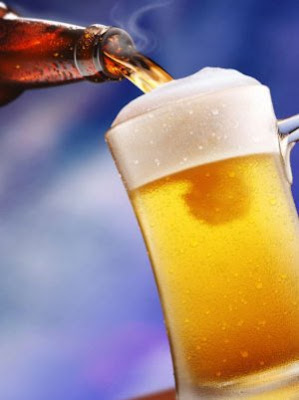 Saturday night, freezing cold weather, restaurant as full as a state school hat-rack and the phone still ringing at seven o’clock with late diners hoping to sneak in. All we need now is beer.

I am always scanning the bookings list during the week to see if I can recognise any regulars, especially those who enjoy their beer. When I know these folk are coming in I know it will give me a great opportunity to showcase the 70 odd listed beers that we stock all year round
as well as the chance to treat them with something ‘off-list’ from the cellar or spoil them by getting something extra special for them. The other bonus is that if they don’t want it – I get it!

This night we had two tables in the dining room who were beer nuts of a pretty high order as well as a few other diners scattered throughout who were hoping to try something a bit different. Because we had hosted our Beer Dinner the night before, I had been out to Purvis Cellars for some stock so I had a bit of a stash of ‘specials’ in the cellar.

Both these tables are restaurant regulars and beer nuts but were unable to get to the beer dinner. So we proceeded to do something of a “I can’t believe it’s not a beer dinner, beer dinner” of our own. The younger blokes on a table of eight were more your international lager drinkers with a few different styles thrown in while the older party of four have pretty much got to the stage where they tell me what they are going to order foodwise and I just keep matching beers coming their way.

Working from a starting point of lighter flavoured styles through to a series of really full flavoured limited release ales was a real challenge – especially as I still had to look after the restaurant, restock, take bookings, deliver desserts .... not drink any beers.

From Kronenburg to Budvar, from Fat Yak and Barons ESB to Young’s Christmas Pudding Ale and Redoak Christmas Cheer, Innis & Gunn (half a slab between the two tables!) and Cascade First Harvest to Grimbergen Blond and Floris Fraise strawberry beer it was a beery feast fit for a king, a queen and a truckload of knaves.

Big HI and thanks to Rod and Barb who were back again last week with Rob and Jo and who cleaned out the rest of the Specials Cellar. It’s a good excuse for me to get out to Cloudwine and Purvis this week to restock. Love the shopping bit!

Email ThisBlogThis!Share to TwitterShare to FacebookShare to Pinterest
Labels: beer, The Courthouse Restaurant