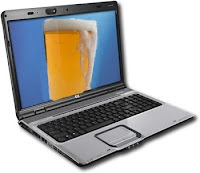 You remember that ad on telly a few years back for some shampoo or face cream or something girly like that featuring a pretend Scandinavian woman letting you in on the secret of nicer looking skin or fluffier hair or better tips? I think she said tips. Anyway, the tag line was that ‘you tell two friends and they tell two friends and so’on en so’on en so’on!’ Crap ad from a blokes point of view but I draw on it now to make a good point. Stick with me.

I got into this blogging caper through Dr Lager when we started our homebrewing operations and in the beginning I just sort of figured it would be half a laugh for the two of us and maybe some of our especially bored mates. We posted the results of our brews and plans for the next one and forwarded some brewing tips we found online. Before long I found myself drifting off topic slightly and exploring different aspects of brewing and beer drinking. Next thing I was pumping out every beer related post I could think of and before I knew it I was musing and reckoning and reviewing and wondering about beer, beer culture, beer buying, beer reviewing, beer brewing and boobs!

And, more than this, people started to leave comments on the stuff I was writing. They were sharing their own beer experiences and seeking answers and questioning other blokes’ masculinity and sexual prowess (though I think these may have been mates commenting under FALSE NAMES!! For SHAME!!) And not just local folk either, but blokes and blokettes from interstate and around the globe! Who knew that this internet thingy was WORLDWIDE!?!

Then it suddenly dawned on me – I had become a beer blogger!!

Each time I discovered a new beer blog I found yet another through their blog or one of their articles or their blogroll or list of mates. I could see what the pubs were doing with food in Portland, what was new and happening in bars in Texas and Missouri, what craft brewers were doing in New York, what was worth drinking in Canada and I could follow the quest for real ale in London. All this from behind a pissy little laptop and a glass of beer!

Every day I would unearth a gem and learn a little more about beer and beer culture around the world. And with every visit made and received and with each comment collected and delivered it seemed that the Beer World was getting smaller and more and more accessible. Before I knew it I felt as if beer blogging was just one big virtual pub crawl and you couldn’t stick your head into a venue without bumping into a mate! At times after reading a review of a beer I even felt as if I could actually taste it – despite the fact that I couldn’t even actually get my hands on it.

Beer blogging has broadened the reach of real beer, it has given air to opinions and trends and marketing strategies, it has allowed those undiscovered diamonds to find an appreciative audience and it has brought together some good honest beer lovers who love to share a beer – real or virtual. These ‘good blogs’ are also keeping at bay the dangerous beer geeks and uppity beer snobs so, keep up the good work, all of you!