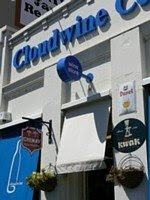 Again I have the brother-in-law to thank for this one as it all started with a ‘check out this website’ kind of offer. It led to the discovery of a new beer retailer, some ripping good untried beers, knowledgeable and friendly staff, a day trip during the kids’ holidays and a good excuse to keep crossing town every few weeks so, really, it just ticked all the boxes.

Cloudwine Cellars is, by their own definition, a ‘fiercely independent wine merchant’ and is one which does a particularly good sideline in craft, independent and other hard-to-get beers as well. As a beer lover I guess I might describe it as ‘a gold mine of very fine beers in a beautifully presented retail environment staffed by blokes who know what they’re talking about and know that it is the customer who pays their wages and who also apparently stock some nice wine as well’. But that’s a bit hard to fit on a business card.

A fairly small but welcoming shop front is neat and tidy without being fussy or poofy and the fully stocked and properly labelled shelves and displays are signs that someone cares about what they are doing rather than a sign that the staff have too much free time. The lack of space is no hindrance if you have the place to yourself but they have very good back up plan in case the shop is full. A very ‘user friendly’ website and weblog are a terrific tool for working out your shopping list and a bit of virtual browsing is a great way to work out the cost of your trip as well.

At the South Melbourne shop I was led around a corner of the shop past the beer fridge to a place I can only describe as like the library in a gentleman’s country estate – an alcove of three floor to ceiling shelves stacked full of any decent beer lovers’ beer wish list. Craft brews from around the state and the country, international specialties and unique beer gift style bottles and boxed surprises as far as the eye can see. And Chris was more than helpful and genuinely interested in talking about the beers that he had tasted himself and informative about the origins and tasting notes of the newer stock.

This was the first of what will be many trips to Cloudwine Cellars and I suggest that anyone keen to see what a well run beer operation looks like checks out the website and the blog and, if possible, get in and see them for yourself. In an age where so much retail philosophy seems to be based around getting further and further away from the annoyance of actual customers and liquor retail in particular grows bigger but less personable it is nice to see that people like those behind Sword’s Select, Cloudwine, Purvis and a few others (who I am getting around to plugging!) are beginning to buck the impersonal trend and giving great product the shelf space and the exposure that it deserves.

Further to my comments about the shop itself – sorry, “retail space” in case there are any interior designers, social environment engineers or other retail marketing types listening – I really was impressed by the layout, the look and the general vibe of the place. Some of the big players in the booze market, as well as retailers in general, might like to get the number of the people who thought up the ‘feel’ of the Cloudwine Cellars operation. I should clarify at this point that I have only visited the South Melbourne shop and I guess the other two could look like a poorly constructed bush outhouse; but I am thinking NOT.
Posted by Beer Blokes at 13:28