For those of you who attempted to solve the first beer quiz challenge a couple of weeks ago, here is a follow up teaser for you. You have forty five minutes and extra paper is available upon request. Please print answer neatly and don’t spill any beer.

Question; If it is now day twenty and the boy’s lady is due home from overseas the following day, and the boy has been at home looking after the two pre-schoolers for three weeks, how many beers does he have left? 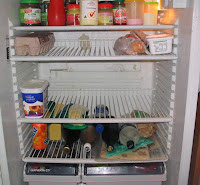 Tomorrow I'll let you know what nice beers I have bought.

Email ThisBlogThis!Share to TwitterShare to FacebookShare to Pinterest
Labels: quiz

I'm concerned about the type of impression you are leaving on the young'uns Professor Pilsner.

A fridge devoid of beers sets not only a bad example but suggests to the little Pils that planning (and sneaky emergency beers in fridge) is non essential.

Dr Aylett,
Appreciate your concern and direct your attention to post about 'sneaky laundry beer hiding furniture supplies'. Also, never underestimate the educational value of a pre-schooler road trip to a fine beer merchant. "Who can count all the beers that have animals on the label, kiddies?" "How many lagers can Daddy fit into this basket?" That sort of thing.