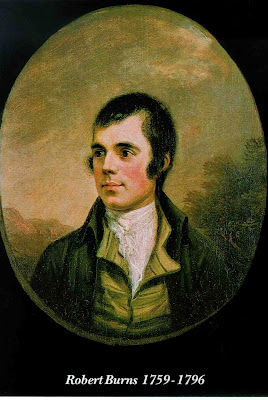 As my Australia Day post showed, this blog is a celebration of all things beery and celebratory and .. well, beery. Continuing this theme, and as something of a shout to my Celtic mates (in particular Shandy and Ronan) I present this treatise on the not-nearly-well-known-enough-in-this-country tradition that is Burn’s Night.

I looked this up and, you know what, it has nothing to do with people who get too pissed on bonfire night at all! Don’t get me wrong, it’s still about people getting pissed, but just nothing to do with fireworks. Burn’s Night commemorates the life and literary contribution of the great Scottish poet, Robert Burns and is held on the anniversary of his birth, January 25.

The night is conducted according to a set order of proceedings but this is not to say that the night is a stuffy, formal affair. Welcomes and poems and special foods and toasts and such are the order of the night and it seems that if some mention is made of Mr Burns himself then it qualifies as a Burn’s Supper!

Or, as comedian Danny Bhoy describes it;

It’s a traditional night when us Scots get together, drink lots, eat crap and recite bollocks to each other….or as it’s known throughout the rest of the year, a Friday!

The basic premise appears to be to avoid the night just becoming an excuse to drink a lot by celebrating The Bard’s life. This is done by drinking a lot. Some haggis is also eaten as well as ‘plenty of neeps’(?) and some poems are read. In fact, the basic format of a Burn’s Supper on Burn’s Night has not changed since the time of his death in 1796. A general welcome is followed by the Selkirk Grace, then the ‘piping and cutting of the haggis’ accompanied by Burn’s poem, “Address to a Haggis” after which the haggis is cut open. When does the fun start, I hear you ask? I’m guessing that this is the point at which some drink is taken.

A reading called ‘immortal memory’ follows and this is like an overview of Burns’ life. I have not experienced the ‘real thing’ but I can tell you that Shandy’s condensed version of Burns’ life after he’s had several beers is a theatre experience not to be missed. I’d retell it here but; (A) I was laughing too much to remember it all and, (B) I had had as many beers as he! Official Burn’s Suppers conclude with the singing of Auld Lang Syne.

I hope this brief history of Burn’s Night is at least reasonably accurate – if not, I blame Shandy for lying to me – and that it has broadened the cultural horizons of our readers. Have a Beer for the Bard this time next year! I will.