A nice way to watch the cricket 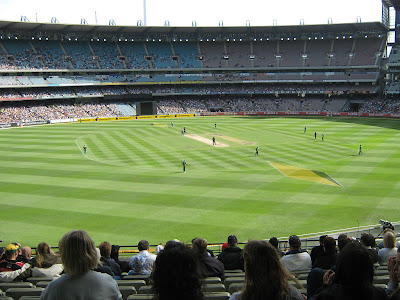 The first one-day international of the season. A healthy rivalry between the Australian and South African teams. A sunny day that’s not too hot. A relaxing train trip into the MCG and a pocket full of free entry to the Cricket Victoria room in the Olympic stand with seats looking over the bowler’s arm. What could spoil THAT?

Dr Lager stands puzzled in front of his open wardrobe;
“Hey, Mrs Lager (not her real name) I have to wear a suit to the cricket, where is it?”
Mrs Lager;
“In that box.”
“What box?” (He appears more puzzled.)
“THE box.”
“WHAT box?!” (More puzzled and a little annoyed.)
“The box that I put all those other clothes in for the move.”
“The box that you packed clothes in that’s here in the wardrobe?” (Less puzzled, more annoyed simmering dread.)
“No. In the box that I put all those clothes in and that I got you to take to the storage garage which is half an hours drive away from here and which I asked you to label but I don’t think you did and so it would look the same as the twenty other boxes which are also in the storage garage. Why?”

So I’m sitting on the train with Dr Lager and I’m admiring the suit jacket that ALMOST matched his semi-casual pants and I casually comment on the nice suit jacket. “That looks a lot like a suit jacket from the formal hire shop that we used to work in together, Dr Lager.”

“Yes, yes it is exactly like a suit jacket from the formal hire shop that we used to work in together, only back then I didn’t have to fork out SEVENTY #%ING BUCKS to hire it!!!!”

The Cricket Victoria room is a lovely spot from which to watch the cricket and the company includes many faces familiar to sports fans and cricket tragic alike. The beer is served with a smile from friendly staff and the meals and snacks are several standards above the over-priced fare on offer to the huddled masses. You can choose to sit inside and watch through the full length windows or make your way outside to the reserved-seating-very-nice-viewing area and contemplate just how lucky you are to be there.

Two things struck me that I will share with you. It is slightly unnerving, and at he same time oddly warming, to have the ordinary cricket fan (and some are very ordinary) look at you through squinted eyes from the other side of the glass wondering what sort of ‘suits’ are in there living it up large with the rich and famous. My eyes met one bloke who turned his nose slightly as if to say; ‘Cricket snobs’ and I returned a look that said; ‘Mate, I’m normally out there with you and I feel just a little like I’m a ‘cricket class traitor’, but, hey, free beer is free beer, so, you know, one-nil, mate.’

The second thing is; it is a really funny feeling to be served a light or mid-strength beer in a plastic cup from a suited bar attendant who calls you sir because that’s the only way to get a beer into the ‘outside’. And there is more than just a little Beer Karma returning when the same ordinary cricket fan walks past again and smirks to see the ‘suits’ drinking mid-strength from a plastic cup just the same as he has to. ‘Fair enough, I think to myself. One-all. What did you pay for yours? Hmmm. Two-One.’

At exactly that time, Beer Karma showed up again as the suited bloke next to us managed to let a full plastic cup of light beer drop dead-straight to the deck at his feet eliciting a crisp ’thunk’ akin to leather on willow but with the addition of aspirated lager showering his Armani trousers and those of his assembled guests. Now I know why they don’t let glass out of the room. Two-All.

A huge thank-you to Chris and Lazz for the invite as the day will hold many fond memories for many different reasons. From laughing at ‘over-refreshed’ ex test cricketers attempting to cough up a lung and launch a ‘ground strike’ from the other end at the same time in the gents toilets, to the almost surreal sight of seeing ex English test off spinner, John Emburey, graciously holding court with a large bloke called Scotty who plays in the fourths for a Geelong based team. The wily old bowler was so generous with his time for Scotty and his well-oiled mates and the scene was almost surreal with John offering advice on team success and Scotty following up with “A bloke once asked me what me ‘wagon wheel’ looks like and I told ‘im I ate it!! HAH!!”

The company was magnificent, the view of the game spectacular and the food and lager was very much appreciated.

And, as evidenced by Dr Lager’s suit jacket, there really is no such thing as a free lunch. 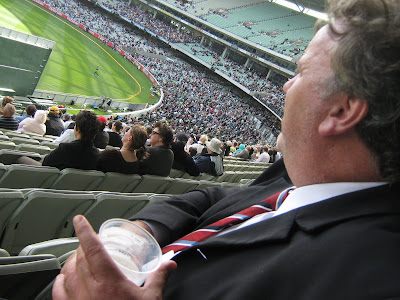 Sounds like a great day out. I'll admit I'm jealous after my recent day to cattle class at the SCG, corporate hospitality really is the way forward!

Can't believe they still serve midstrength in the boxes! You'd think some nice premium beers in cold glass bottles would be the perfect match..

Love this blog and have added you to the blogroll and the reader.

Thanks Moses and welcome to Beer Blokes, happy to have you on board. We often delve into the connections between beer and sport although I have to admit to being a league fan! The Bum Sniffers have never really found a home amongst the AFL born and bred. Something to do with the fact that they seem to kick the ball out-of-bounds a lot and then everyone claps. I'm sure we'll start up some good discussions!
Cheers,
Pete - Prof. Pilsner

Started following Union about 10 years ago and enjoy the contest of the set pieces rather than the group hug they tend towards in the 13 man code. Wonder what would happen if they pushed in a scrum?

As for the AFL, have been to a few Swannies games and it's somewhat enjoyable - at least they serve full strength. The game seems to go on for ever, and unlike Test Cricket that where you can set a plan that may take 4 days to bear fruit, it appears to my untrained eye that AFL is about scoring goals and that questions could be amply decided in 80 minutes rather than 3+ hours.

Highlight was Barry Hall knocking some goose out right in front of us.