What we drank for Christmas 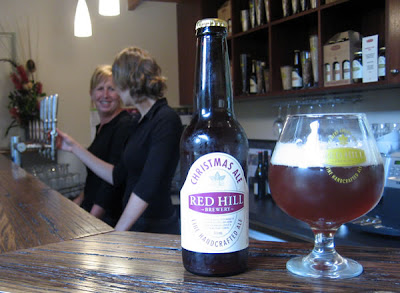 As I wrote in a pre-Christmas post, the festive season is a special one when you have little kids. The whole ‘joy and glee and wonder’ thing is one of life’s little pleasures.

But so is beer.

Christmas is a time for celebrating, for gift giving and sharing with family and friends and for enjoying the moment. And we made sure that the beers played along with this theme. Dinner on Christmas Eve was at Mrs Pilsners folks’ place and we stretch the meal out over a few hours and break in the middle for the little ones to catch their breath and open the presents. This gives us plenty of opportunity to squeeze a few very nice beers in and around the meal.

Grandad doesn’t usually have a lot of beer in stock as he doesn’t drink it all that often, and it is usually a selection of either VB, Melbourne Bitter or light but as we arrived the first gift of Christmas came in the form of a fully imported German pilsner, no less. Readers of this blog may recall Professor Pilsner proferring opinions of Oettinger Pils in previous posts *Peter Piper Picked a Pick of Pickled Peppers and Pilsners* and you may also remember that this was the beer that I had stolen from me in the carpark of the beer shop. I’m not suggesting that this was the same slab.

Next , in the spirit of giving, we popped the caps off a couple of Barons Pale Ales – a gift in appreciation of my fine work in spreading the good word on their craft brews – and these went very well with the light smokiness of the ham.

Christmas wouldn’t be Christmas without a Christmas beer and Weihenstephaner, with its historical links to good King Wenceslas, is as Christmas as they come. When you choose a Festbier (as seen in ‘Ale stars – the one where we drank celebration beers’) well, it’s just even more Christmassy. 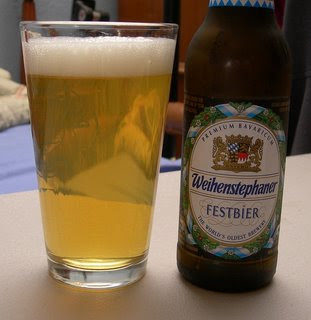 And Christmas wouldn’t be Christmas without a beer that actually has the word Christmas in its name, so on came the Red Hill Christmas Ale, a beautifully warm and mellow and festive tasting ale which developed even more depth as it warmed.

Chris and Jenny moved on to Jennys folks’ place for a traditional midnight feast of pork and scotch so we packed up the little Pilsners, did a tour of the fairy lights on the drive home and tucked them into bed. The final beer of the night was another Barons Pale Ale. Well, two really. The kids left one out for Santa.

Where did you pick up the Weihenstephaner Festbier? Can't say i've seen it around, and it sounds interesting.

Festbier has been reasonably easy to get the last two Christmas' (Dan Murphy's, Cloudwine ...) but if you haven't seen it over there it makes me think it might be an Oktoberfest beer imported under a different name? Very festive and refreshing with that classic Weihenstephaner pedigree. Hope you can trck some down.
Cheers
PP

I think there is more than one Tim posting here!

Sorry for the assumption, Tim ... and Tim. I thought it was funny that the little Simpsons Culinary Brewer didn't show up!

Hello and welcome to new Tim.