Light thinking for a heavy problem 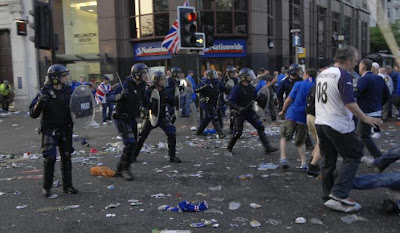 Beer only ever seems to make the front page of the paper when the news is bad, sad or stupid. Just once I’d like to see a front page story about a nice craft beer winning an award or a tax break being given to small volume brewers so that they might compete a bit more fairly with the bland multinationals but I guess I’ll be waiting a while.

Today’s news is alarming. Even the headline says so; “BEER ALARM”

“A huge drop in light beer sales has been blamed for the surge in street violence. Pressure to scrap the tax on light beer is building as more drinkers turn to stronger booze. Light beer sales have fallen 15% in seven years while street crime has soared 43%. Vic Health chief executive Todd Harper said yesterday there was a definite connection between the move away from light beer and the rise in drunken violence. ‘I definitely think the move to heavier beer is part of the problem’ he said.

‘Anything that can kick start a change in the culture of alcohol consumption in Australia to encourage the consumption of low alcohol products will be a positive one‘, he said. The excise cut would see light beer drop 20c a stubby, or $4.80 a slab, and about 4c a pot in bars.”

“Vic Health believes the move would tempt full strength beer drinkers to make the switch. ‘If we look at the strong associations between consumption of full strength beer and anti-social behaviour, such as assaults, there is no doubt there is a connection between the two,” Mr Harper said.”

No one would disagree that the problem of drunken violence is a serious issue worldwide, but for goodness sake, can we please start attacking the problem at the source instead of making things up, using opinions as scientific evidence or blaming irrelevant factors? Please??

First, Todd, a 14% decrease in light beer sales over seven years is not “a huge drop” in the overall context. Sales figures show that beer sales across the board have dropped – we are drinking less, but better, as the rise in premium, imported and craft beer sales would suggest – it is not just light beer that is lower. But, hey, if it helps to whip up the hysteria for your cause then, by all means, go right ahead.

Third, I don’t have any evidence to support my claims but I see that I don’t really need to. Todd, you can’t justify your own findings and throw scare around because (you) “definitely think the move to heavier beer is part of the problem”. I definitely think it is a cultural and behavioural issue brought about, in part, by a gradual acceptance of poor behaviour with no consequences and no punishment, so I’m right.

Of course I don’t mean to make light (pardon the pun) of a serious issue, but it just burns my brew every time I hear beer in general getting the blame for the problems caused by a bunch of bottom-feeders who will cause strife regardless of the price of heavy beer, the tax on light beer or the value of the New York Stock Exchange. Let’s deal with the dickheads – sort out why they are being dickheads, help them out or kick their arses if they don’t want to follow the standards of a normal, civilised society – and stop blaming beer. It loves us and wants us to be happy.

Why give tax breaks to help small businesses and a growing industry when you can increase prices making it harder on those breweries and on the consumer, and pretend as if you are making an effort at solving a real problem?

I know yours was a good post because I've got the blood pressure rising a little again.

I think I'll have a strong beer and go beat the crap out of my neighbour ;)