And they say I’m a Beer Snob 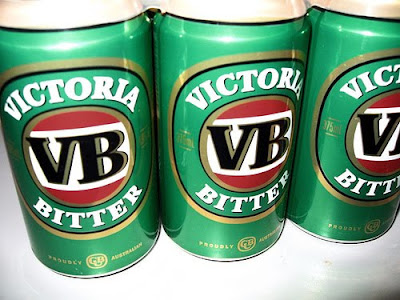 Dr Lager and I took our families together for a short break in Beechworth, North East Victoria, during the school holidays and the trip has generated about six posts that I’m currently fine-tuning. We were discussing Beer Labels – as in, the terms used to describe various types of Beer Drinkers – when we began a colourful discourse on the difference between a Beer Snob and a Beer Yob.

On my return, I began plodding through five days’ worth of newspapers and was a bit mystified by a series of short letters to the editor regarding an Australian institution of beer, VB. Victoria Bitter, referred to nationally as VB so as to trick interstate drinkers into thinking that the brew is NOT from Victoria, is this country’s top selling beer by volume. In Victoria alone it accounts for 28% of the amber fluid downed in the state.

The letters in the paper were all in the same vein – “I am never drinking VB again”, “ripped off by new VB”, “VB has changed for the worse” – all that sort of thing. There could only be two answers to my query. Either these drinkers had accidentally bought the new VB RAW (low carb VB, just what the beer world was missing) or CUB had suddenly begun brewing VB to a different recipe while we had been away. NO to both the above.

I think I wrote earlier this year about CUB dropping the alcohol level of VB down 2 percentage points from 4.8% to 4.6% a move which saved the company some tens of millions of dollars in beer tax thus preventing the need for a price rise. I don’t want to come across as ‘all beer-knowing’ but I would be happy to lay a fair wad of cash on the fact that most VB drinkers would not be able to taste a 0.02% change in ABV. An even larger wad says that MANY would not know the difference between VB and Foster’s Lager if the bottle wasn’t labelled. That’s no slight on the VB drinkers – it’s just a fact.

Take a photo of your computer screen NOW. I am going out to buy a stubby of VB. That’s right, you heard me, VB. I have some 4.8% VB in the fridge at the restaurant and I will do a side-by-side comparison to see if I can detect any difference.

No, seriously, wish me luck.

I had a couple of bottles of Vb over the weekend. After spending a coupel of hours tending to my hop garden it went down a treat. Its ironic that they dont use real hops in the beer though!

I was explaining the 'hopping' process that The Big House uses to some guests the other night. They laughed to hear that rather than adding fresh flowers or pellets it's more like "six drops of the essence of terror, five drops of sinister sauce" ... ha ha
PP