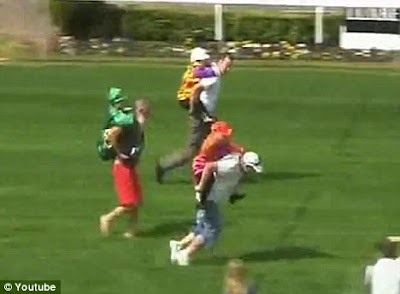 Every now and then Beer Blokes slots in one of these posts to remind us all of the life-enriching power of the Amber Nectar and how its absence can create voids that can only be filled by making stupid comments.

This week we welcome the fun-starved micro-intellects who have gotten thereselfs all in a flutter over, well, a very small issue, really.

The Cranbourne Cup is a regional annual race meeting that raises little interest to anyone other than the loyal locals who fill the Bogan Enclosure, drink heaps of Fizzy Yellow, place a few bets and hope to end up in the same cab home as Sharon from accounts. But this year was different.

As part of the crowd entertainment the organisers ran the Midget Cup – a piggy-back race down the main straight featuring blokes carrying dwarves in jockey’s silks on their backs. Not a particularly enthralling or engaging spectacle, I had to admit, but certainly more fun than some other half-time spectacles I could recall. Well, despite the fact that all participants – regular and pint-sized – appeared to be willing as well as smiling all the way, there has been a massive uproar and gnashing of self-righteous teeth.

Everyone from the State Premier and the Minister for Racing And Not Letting Anyone Have Fun have come out in ‘defence’ of the ‘little people’. Don’t mind that they WERE PAID to appear and have stated that they don’t feel belittled (sorry, couldn’t help meself) by performing within their obvious physical capabilities. Their spokesperson, Jeremy Hallam, published a response to the do-gooders who were claiming that the ‘race’ was demeaning to short people, politically incorrect and socially unacceptable.

Jeremy is a regular at a restaurant and bar I used to work at and I consider him to be a top bloke. Although short in stature he is a giant in terms of his drive, his ambition and his determination to do what he wants to do, all the while accepting his limitations but not allowing them to plot his destiny. He is a great self-promoter, hard worker and a clever organiser having arranged events and fund raisers for local youth. If he wants the Nannies to lighten up – then lighten up!

It was all a bit of fun, it was enjoyed by those who joined in and, although not especially entertaining, it was an amusing distraction for the crowd for all of two minutes. And if it hadn’t been captured in a grainy, shaky video on a cheap phone camera and then sold to the Media, it would have been as memorable as it was brief.

And lastly – those who have the various forms of Dwarfism are not called ‘little people’, ‘short-statured people’ or ‘differently abled people’ – they are called dwarves!! Being a dwarf is a part of who and what they are, like being Caucasian, Catholic, Columbian or a Collingwood supporter.

Chill out, have a beer.

Thanks for the link Chris, it's good to see Jamieson - and craft beer geneally - getting some publicity!