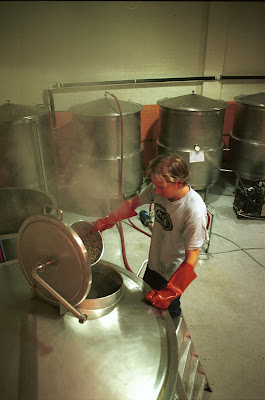 Isn’t it every boy’s dream to grow up to own a brewery? Or is that just something we wish for once we acquire the taste for beer?

For many that dream has turned to reality and, in almost every case, it is the result of hard work, determination, more hard work, a bit of luck and some more hard work. And a fair bit of cash. Oh, and a little hard work.

On recent visits to Mountain Goat in Richmond and Bridge Road Brewers in Beechworth the thing that struck me even more than the quality of the beer was the fact that, while we were all happily drinking, the brewer was happily brewing not more than a few feet away. And they were brewing in equipment that they had bought in a space that they had paid to occupy using power, water and gas that they foot the bills for. In short, there is as much capital investment in a craft brewing operation as there is investment of emotion and passion and care for the end product.

But the OTHER reality is this; for many of those dreamers, owning and operating a brewery on even the smallest scale, is more a fantasy than a dream. Lack of funds or the ability to convince someone to stump up the funds, nervousness about the economic forecast, inability to make the emotional and time commitment – whatever the reason, some can’t live the dream. For many of these people, there is contract brewing.

Having your recipes brewed, bottled, labelled and shipped for you is a means of getting your beer out there to the waiting masses, to establish your brand and build your market. Contract brewing is done by large, purpose built breweries or by smaller independent breweries looking to maximise the operating output of their plant or to simply help out would-be brewers who may be in a situation similar to the one they found themselves in years earlier. Other breweries are contracting out some of their regular brews to contractors where capacity has been reached and they want to concentrate on special or limited release beers. Either way, contract brewing has a place in the craft beer landscape.

I hope I haven’t made it sound as though I think that true craft brewing is King and contract brewing is Evil, I just want to establish the facts before asking for your comments. Many brewers who are making their beers by contract are upfront and honest about their operation. They may call themselves a ‘Brewing Company’ rather than a brewery, or they may (if you look at the label closely) list the company who makes the beer for them. Others list the office address on the beer. But, some ‘real breweries’ also use the tag ‘Brewing Company’ so this can be confusing as well.

Where do we go from here? It’s hard enough to get more people drinking better beer without also having to teach them the difference between contract brewers and brewers who have made the concrete, risk-all, financial and emotional commitment to brew good beer. Should we even tell them? Is there really a difference to the drinker? What about the brewer? Does it matter to them? Should we support a move towards a trademark of integrity like the Heart Foundation Tick or Buy Australian campaign to help identify craft beer that is brewed on site by the brewer him/herself?

Let me know what you think.

Interesting post. My obserations tell me its a lot easier to set up a microbrewery in states other than NSW. It seems that most NSW based 'brewing companies' brew under license as they basically can't pull a commercially viable business plan out of owning your own micro.

But hey as long as good beer is being produced I don't have a problem. I do have a problem with pretenders (ie big breweries attempting to crack the craft beer segment) and short term players who have entered the market to make a quick buck. I also detest the prices of craft beer in Australia. Especially coming from the UK and the EU where craft beer is cheap and readily available.

Yes good point Pete. I think some good beers are contract brewed like Epic in NZ among others. I think sometimes we do more harm than good by telling the experimenting drinker that the craft beer they really like is contract brewed. Some of them might just think oh well "bugger it I'll go back to my (insert mass produced name here)", I also don't think its any easier to launch a brand no matter how the beer is produced. As you mentioned some great beers begin life this way and eventually the owners do open their own i.e. Sam Adams Boston Lager? Others say they have every intention of doing so but never really commit to taking that next step. Its a tough one alright.

I'd be interested to find out why NSW finds it more difficult to take the punt and set up shop for themselves.

You're right when you say that the important thing is choice - I'd like to think that the quality of the end product is what's important. But speaking to some industry insiders recently, I was suprised to find that some of the blurbs about the heritage of some craft beers are nothing but marketing stories made up to give a contract brewed beer some 'street cred'! I just think that lessens the work done by some of the other craft brewers.

Yeah, I'm not about complicating it for the 'new beer blokes' but I think it's the thin end of a big wedge if we (who have attained a higher level of enlightenment!) don't support people like Ben Kraus or Dave Bonighton (don't know if you've met him - top bloke!) in the effort that they make and the financial risks that they take.

I am also a big fan of the freedom that owning your own gear gives a brewer - I bet some of the best beers that I've had this year alone would not have come out of a contract arrangement.

I'm not about devaluing what contract brewers do, it's more about talking up what the others do, if that makes sense?!

As with all things Prof, where you draw the line will always cause problems. There's nothing evil about contract brewing - it doesn't matter who owns the plant. It's the approach to brewing that matters. Samuel Adams, now the States' largest domestically-owned brewer started as a contract brewer and, even today, something like 60% of their output is contract and they both make great beers and give plenty back to the industry.

Temple Brewing here is a great example too. They do the brewing themselves but on someone else's plant and are doing a great job as well.

Of more concern are the number of generic beers that are coming out that are nothing more than labels produced by beer marketers. They do nothing to promote good beer, have no investment in the industry and often aren't particularly open about their brewing approach or credentials. These companies have the ability to hurt the industry, as was shown in the States in the mid-90s.

Contract brewing isn't an automatic evil, just as owning your own kit doesn't mean the beer is automatically good.

I agree. As I said, I think it's better for the industry as a whole to focus on what's good about the craft beer industry rather than pooh-pooh what the 'bottom 10%' do.

It has been an interesting discussion regarding how beer drinkers perceive the relative 'values' of kit vs contract! As long as we keep getting access to better beer, I guess the drinker is the winner!

I don't think it matters greatly prof, at the end of the day if the beer is good, the beer is good! And I know when I savour a Barons - the most well-known example of contract I can think of in Oz - it's definitely good, and it's place of origin the last thing on my mind!

Very true. When the drinker gets a good beer, the industry wins. I jus wanted to throw the idea out here that those drinkers who are 'drinking at an advanced level' have a duty to keep everyone honest - like Matt said, when some are using dishonest marketing to trick people into drinking some prestige that doesn't exist, we need to make them aware that they may not get away with it.

Have checked out your brewery tour blog - very impresive. When I get back up north I'll drop you a line and catch up for a beer.

In terms of beer, there really are no bad beers. Just beers I wouldn't order a second pint of.

As a contract brewer, I can see why people may be a little wary of a product that has been produced by someone other than the person making the beer. However, as has been pointed out, if the beer adheres to certain 'craft brewing principles', then I see no difference between a beer brewed by the brewery for the brewery, or one that is brewed by a brewery for someone that, for whatever reason, doesn't have a brewery.
Just because you have the cash to start a brewery, shouldn't automatically entitle you to some exulted position over someone who doesn't have the cash. Unfair exclusivity me thinks. It all comes down to whether the contract brewer is willing to invest the time and effort into the industry, and help promote quality craft beer. If they are not, then they are not worthy of custom. Just my 2 cents.
Oh, and for the record, my company is Boatrocker Brewing Company.
Cheers,
Matt

Oh, and one more thing... Mountain Goat started out contract brewing too...