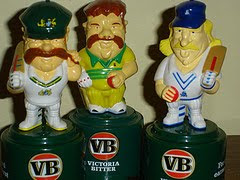 Interesting to see that Foster’s has come out today and apologised for using former Australian cricketer and holder of the unofficial Sydney to London beer drinking record as a model for a marketing promotion conducted in the 2005/06 and 06/07 seasons.

A senior executive, Chris Maxwell, said the company now sees that using David Boon as the model for a talking doll which was activated by TV commentary signals was the wrong kind of ambassador for the VB brand.

“Looking back, we have decided that was the wrong thing to do. We didn't have the foresight to see that this issue was going to be so significant. And in glorifying that behaviour we have added to the issue of the normalisation of binge-drinking in Australia.”

"We thought that David Boon had a perfect fit with VB. He was a good Aussie bloke, with good Aussie values. However, we have had a lot of criticism around using him in regards to this binge-drinking issue,'' Mr Maxwell said at a Sponsorship Australasia conference in Sydney yesterday.

I guess the reason that Foster’s decided to apologise for the use of Boonie some four years AFTER the promo finished was because they were speaking at a sponsorship conference – I don’t even recall there being much fuss at the time. I assume the standard gaggle of wowsers auto-posted their outrage to newspaper letter columns at the time but other than that?

And as for Boonie being a “good Aussie bloke with good Aussie values” – couldn’t agree more. The fact that, in his younger days, he did something a wee bit silly (52 cans on a flight to London silly) in an isolated case of peer group pressure and sporting club culture doesn’t mean he should become the poster boy for binge drinking. We’ve all done things that, looking back, we see as irresponsible or unhealthy or lacking good judgement, but most of us also move on, learn from the experience and don’t repeat the mistakes of our youth. Some of us even mature.

Can we stop generating a mythical moral majority where I just don’t think it really exists? The bleaters are always going to carry on but, you know what I reckon? There really are still a thousand times more of US than there will ever be of THEM!

Perhaps by way of assuaging* their guilt, Foster’s could bring out a new Boonie doll this cricket season which says things like; “Do us a favour, Knackers, and put the kettle on?” or, “Tell you what, Shags, let’s put these cans down and share a strawberry parfait!”

*Assuage – now that’s a word you don’t often hear in these pages, is it?! I think it means that they are making thereselfs feel better by being sorry. Or sumfink.

and thanks to Mrs Lager for pointing me to the story - I don't read The Big Paper!
Posted by Beer Blokes at 11:45

It's right up there with using Reg Regan - the face of drunken footballers - to promote VB as well. Mind you, I am wondering when they are going to apologise for their "VB Raise a Glass" Anzac Day campaign...for spending more money to create and execute the campaign than they raised by cynically donating $1 from every carton sold rather than just making a donation. This criticism doesn't even touch on the use of alcohol to celebrate Anzac Day - which as one RSL President pointed out was sensitive due to the number of returned servicemen who struggle with alcoholism upon returning from active service.