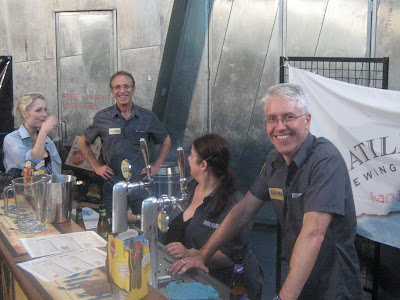 I was going to write up a post on the Victorian Microbreweries Showcase tomorrow, but, put quite simply, I had so much fun I had to do it now. That way, if the mood takes you, you can get down there tonight for the second, and last, instalment.

The Atrium at Federation Square is a magnificent canvas on which to depict the community spirit of the Beer Industry. A generous space that allows room to move but at the same time keeps everybody close creates a warm and welcoming environment. That the beers on offer are hand crafted and, in most cases, poured for you by the craftsman him/herself is something of a bonus. 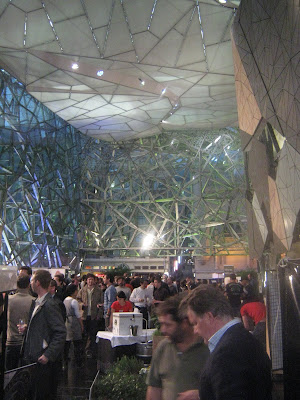 20 plus brewers were displaying their brews (I lost count a little bit towards the end) and with some showcasing a single beer and others offering half a dozen ... well, let’s just say that their was something for everyone. Generous to a fault, the brewers were only too happy to talk about their beers, their breweries or their businesses as well as their plans for future releases and hopes for special release brews.

Arriving early, I felt as though I had the place to myself with some still setting up and others trying to find display stands as others ‘road tested’ their fonts and, in the case of Simon form Hargreaves Hill, their converted esky temprite system. Chatting to the reps and the brewers I felt as if I were at a private beer tasting for one! This illusion was soon shattered as I turned to discover that a couple of people had gate-crashed my beer-do. And when I say a couple, I mean about two hundred – all of a sudden the joint was chockers! The difference between ten past four and twenty-five past four was illustrated by the rise in noise level from ‘private conversation’ to ‘football crowd at train station’. By the time half-five arrived – along with The Suits – there were queues at every booth and the anticipation of trying something new was palpable. Something of an Ale Stars Road Trip then began to take shape as half a dozen of us bumped into each other, and we eventually morphed into a kind of human beer drinking wave snaking through the various stands, sometimes splitting off to seek out an individual favourite, only to rejoin the amorphous beast some two or three beers later. 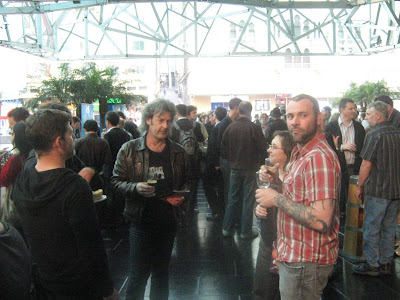 Despite the fact that my head was getting reasonably light, my tasting ticket was not getting particularly shorter. As I said, these beer guys are generous to a fault. It’s difficult to explain just how this event feels to the average punter and I hope the pics do the feel some justice. It’s hard to explain the sensation, but before long you are comparing notes with some bloke you’ve never met and giving and taking suggestions for beers ‘you just have to try’. Strangers become instant friends and calls of ‘where did you get that one?’ and ‘have you tried their Hefeweizen?’ ring out through the growing throng. As I said, it’s just a lot of fun.

If you can get down there this afternoon between four and eight you might see what I mean, in any case, you won’t be disappointed.