A Bloke and his kid walk into a pub 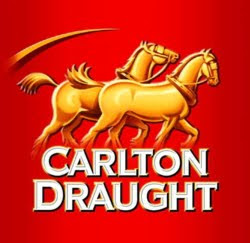 Had a nice story passed on to me by the Brother-In-Law which beautifully illustrates that mystical bond between a father and his son, that special, magical nexus that links the generations and creates a better world.

A couple of friends – for purposes of protecting their identities, let’s call them Dave and Jo – had stopped off at a pub in Inverloch on the way back from a family holiday with their two kids. The three year old boy, let’s call him Sam, raced into the Public Bar ahead of the family so as to scope the joint and identify the location of the playground.

As the family caught up with the forward scout, Dave was greeted with a loud and excited announcement from his son.

Dave caught up with the lad and sheepishly wove his way through the amused regulars and made his way to the bar.

“I ‘spose you’d like a Horse Beer, then mate?” said the smiling publican.

As the Brother-in-Law said to me, Horse Beer – or CUB’s Carlton Draught – is probably a beer that should not necessarily be dismissed out of hand. In fact, as mainstream, medium bodied beers go, a pot of Carlton Draught, rotated correctly, properly stored, well poured and thoughtfully presented to a thirsty man on a hot day is not the worst thing that could happen to you.

I hope that Sam’s enthusiasm for his Father’s simple pleasures continues to develop and that his parents encourage his sense of joy and wonder. And maybe down the track I will recount further tales like this involving ‘Goat Beers’, ‘Yak’ beers, ‘Ned Kelly’ beers or even ‘That beer with the Boobies on it’ beers.

Nice post Prof...though you're kinder to Horse Beer than I would be. But that might be the parochial Queenslander coming out in me more than the beer snob.

Yeah, I typed that one out through gritted teeth! Although, we don't want to be responsible for creating a world divided into Beer Snobs and Beer Yobs - let's just think of it as one big family, but some members are just a collection of dodgy uncles who you tolerate, but continually spoil family photos by standing at the back making silly faces! :)