Plenty of US vs THEM 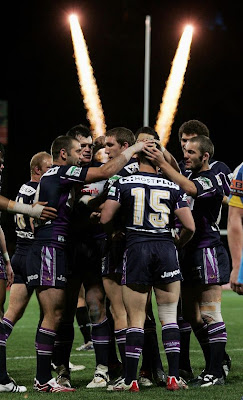 Here I am, sitting at home, beer in hand waiting for 5.30 and the NRL Grand Final to begin. My Melbourne Storm has achieved the rare feat of contesting their fourth decider in as many years and I will have to watch it all from a thousand k’s away.

In 2006 we were very unlucky to lose the big one to the Brisbane Broncos, the following year we gave the ‘Silvertails’ from Manly a good ol’ Victorian hiding only to follow up last year with a forgettable effort against he same team. In those three years we received an element of support from Sydneysiders who hated Brisbane and detested Manly and Sydney wasn’t too bad a place to hang out for the weekend. This year is very, very different.

The Parramatta Eels represent the western suburbs of Sydney, a Rugby League heartland and home to more Rugby League shops per square kilometre than anywhere else on earth. It is where we usually stay when we go north for the Grand Final and it is one of the few places I have found in Sydney that embraces the week leading up to the games’ showpiece. It’s the only place outside the stadium itself that flies team flags, hangs team posters in shop windows and hangs team scarves from its’ cars windows. Even when Parra are not playing. But this year, they are.

And all of a sudden everything is all about us versus them. Sydney has finally shown some spirit and some interest in a game that they claim to be their own. 74,000 fans turned out to see the Eels fight for a spot in the GF against traditional Sydney rivals, the Bulldogs, which made all Victorian sport supporters wonder – where were you all every other game of every other year for the past ten? Crowds of six, seven and as many as 11,000 would regularly trudge through the turnstiles at traditional suburban venues and state-of-the-art modern stadia alike, but if the weather was a bit iffy, the team lost the previous week or there was something decent on the telly, it was not unusual to see that crowd figure halved. Fair weather friends are no help to the team.

So now, Sydney has a team to support – and another to hate. Radio, net forums, newspapers and bars across Sydney and suburbs are abuzz with vitriolic talk of ‘those bastard Mexicans’ these infiltrators from the South who have had the bare-faced cheek to pinch two of our trophies in the short history of their club and who have the audacity to seek to pinch another this afternoon. Insults have been traded, word games played by players and officials of Parramatta and commentators and past greats of the game have had their say.

But, as any Victorian sport fan knows, there are only two places for talk. One is on the field of battle when the whistle blows and all arguments are settled. The other is on the podium after the final siren when you hold the trophy aloft, congratulate your team and commiserate the losers. And then, maybe a third – over a shared beer late in the day. And into Monday. And maybe some more on Tuesday. And a quiet one on Wednesday. And then ....

Good Luck Stormers. I will ride every bump, hit every gap, share every hit-up and celebrate every try with you from my couch. And I’ll do my best to go beer-for-beer with you as well.