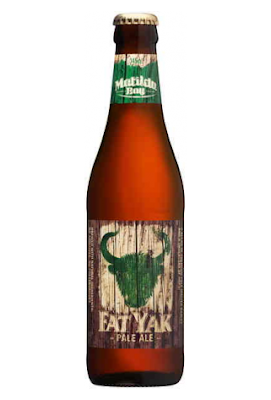 I had written the preceding piece (or the one following piece if you haven’t read it yet) at the end of last week and set it to post over the weekend. This was partly to make up for being a bit slack the last month and because I knew I was in for a busy weekend.

Well, you wouldn’t believe it, but I was ‘talkin’ beers’ with some guests as I delivered their initial drink order – A little Creatures Pale Ale and a Cascade Light, for those playing at home – when I started talking up Matilda Bay Brewery in general and Fat Yak Pale Ale specifically when two of the group mentioned they knew one of the brewers.

“Not Neil Whittorn, is it?” I asked.
“Yes. It is! How do you know Neil?” they asked excitedly.
“Beer.” I offered matter of factly.

Is it just me (and my circle of friends) or has Fat Yak kicked off a quiet anti-lager revolution? I've never seen an ale - let alone a great American-style one like Fat Yak - gain so much traction amongst so many people, and get so many talking about a style of beer they've rarely gone out of their way to try. It's a wonderful thing to see! :)

I was discussing this with some punters the other week and the consensus seems to be that the name has a lot to do with the initial attraction to a beer. It naturally has to be a good beer to get them back, but a good tag is a good start.

I also wonder wether Fat Yak is almost a 'New World' style Australian Pale Ale - Galaxy Hops, a more restrained bitterness than the Alpha Pale Ale and more 'approachable' for those wanting to make the change from bland lagers?

FYI, CUB spent something like $100,000 on research/development/market testing on THE NAME ALONE before Fat Yak became Fat Yak!