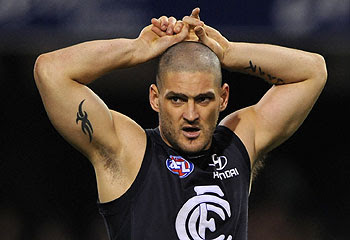 Isn’t it a funny thing. As we get older, we get wiser. At least, that’s the theory. At the very least, as we get older we should be making fewer mistakes. And learning from the ones we continue to make.

Almost exactly a year ago I was relating to you the story of a certain AFL champion player/shit bloke/dickhead. I suggested that his disrespect for his beer was directly related to his inability to achieve every forwards’ dream of kicking 100 goals in a season of football. Beer Karma saw to it that, despite several opportunities and numerous team mates’ efforts, he fell short of the target by a single straight kick in the last game of the home-and-away fixture. Welcome back to Beer Blokes, Brendan Fevola.

Well, he hasn’t learned a thing it would seem. After season’s end last year on his teams’ ‘Mad Monday’ celebrations, Fev was strutting around the centre of the city of Melbourne sporting a tutu, hat and large pink sex toy. As you do. His team mates went for the more traditional fancy dress gear; ie; Fancy Dress. See “common sense & Decency” in the dictionary.

His club’s officials were beginning to tire of Brendan’s unfailing ability to generate plenty of press column inches of bad publicity for the organisation and declared that “any more alcohol related indiscretions would result in Fevola’s contract being torn up”. {Insert sound effect of ripping paper ... here.}

Fev – in short – got rather shit-faced at the AFL’s premier awards night, the Brownlow Medal presentation for the leagues’ Best & Fairest player, and made a total tool of himself on national TV. As a result, Fev has been told that his services are no longer required. The bloke can play a bit of footy but, seriously, how many times should it take before you step back, take a good hard look at yourself and say, “ I need to reassess the way I treat my beer”?

Good luck for the future, Fev, wherever you end up.