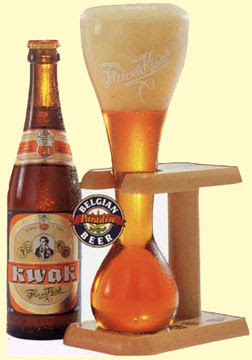 I need your help!

Kwak, along with Innis & Gunn is the most ‘popular’ beer on our beer list. And by popular I mean the easiest to sell when someone says; “Surprise me!” People who order these beers fall broadly into two categories.

The Kwak is also popular due to the marketing value of its distinctive glass. Whenever a guest orders a Kwak, the staff know to take the ‘long way around’ to deliver it so that we show off the glass to the rest of the diners. The number of other guests who then ask “what was THAT?!’ ensures a good crack at extra sales. And here’s where I need the help of the Beer Blokes’ readers.

I always tell the Kwak story to the guest as I’m pouring the beer – it’s a great tale and it buys you a bit of pouring time as well as engaging the diner. A while back a guest was telling me about a restaurant or bar he had visited somewhere in Belgium where the Kwak glasses kept ‘disappearing’. Apparently the bar owner, sick of having his expensive glassware frequently ‘liberated’, devised a basket-on-a-pulley system attached to the ceiling behind the bar.

When a punter would front the bar and order a Kwak the barstaff would reply with;
“Left shoe or right shoe?” The prospective drinker would have to surrender one shoe which would be placed in the basket and hoisted up to the ceiling – when he got his Kwak glass back, you got your shoe back. 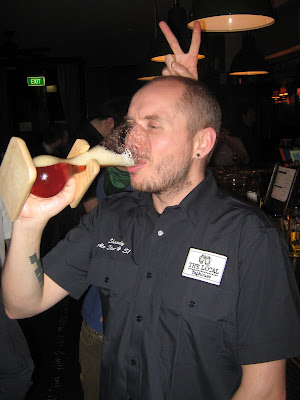 Can anyone shed a light on this tale? Is it a true story, a Beer Myth or a story made up of bits of other stories? Does anyone know of the Bar or restaurant in the story.

Its true, I have surrendered one of my size 11's to secure two glasses for me and my father in law in Bruge.

Did you know in advance that you would need to offer a pedi-sacrifice? If so, wouldn't you just mug a hobo for HIS size 11 on the way in?

No I had no idea I would need to leave a shoe. It was no dramas though. I think I may have even posted about it on my blog?

The nearly in-laws just got back from Bruge but did not have any tales of hocking shoes for their beers!