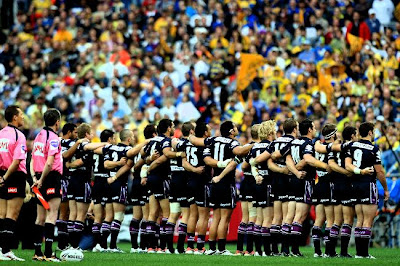 3 Trial games, 26 Home & Away games, 2 Finals Matches and it all comes down to this one day. Eighty minutes of determination, concentration and, for the winners, a lifetime of jubilation.

Pre-game preparation and the warm-up.

They say that the key to a good finish is good preparation and this is no more evident than in the case of a Grand Final. You need to be focussed on your goal and committed to doing whatever it takes. Don’t change a preparation that has worked for you up till now and most importantly, “Don’t leave anything in the tank when the final siren sounds”.

So I went with a James Squire Pilsner. Tried and true, a great example of the style and locally brewed. The original James Squire had a hotel and brewery in Parramatta so I figured his would be an appropriate nod to history.

Another James Squire Pilsner. If it’s working for you, don’t change the game plan. At the five minute mark Melbourne break the line to put first points on the board. I celebrate with restraint – it’s early – and go with a Matilda Bay Fat Yak as I had planned.

24 minute mark and Cooper Cronk throws a terrific dummy to break the line and put Adam Blair away for Melbourne’s second try. Professor Pilsner opens the fridge for his second Fat Yak. The Storm look like they may make the Prof pay for his pre-game promise to toast each try with a fresh beer.

The Storm waste a few scoring opportunities and Parramatta’s lack of big stage experience and Melbourne’s pressure sees the Storm go to the half time break 10 -0 up. The Prof breathes a sigh of relief and enjoys a Bridge Road Pale Ale.

45th minute. Parra get themselves on the scoreboard with a try to Eric Goethe Jnr to make the difference just 4 points. No beer there. 4 minutes later and Greg Inglis takes a high bomb uncontested and strolls under the dot to score. To celebrate such a no-fuss, consistent and pack-leading team effort, a Mountain Goat Pale Ale makes its first appearance. 16-6.

6 minutes later ... Billy Slater latches onto a perfectly executed Adam Blair offload to score the Storms’ fourth try and with a reputation for taking a big lead and then going right on with the business, The Prof is starting to worry that he won’t see the end of this contest. 22-6.

70th minute, ten minutes to go ... Parramatta score twice in consecutive sets to put the frighteners up both the Storm and the Prof and narrow the gap to just 6 points with five minutes to play.

76th minute. Another Mountain Goat Pale fills the glass as Greg Inglis slots a wobbly field goal to take the score to 23-16 to secure the clubs’ third premiership in just a twelve year history. As Channel Nong shows a total lack of common sense and respect for its viewers and cuts to the news as the siren sounds, I am forced to crack a celebratory Little Creatures Pale Ale, close my eyes and imagine seeing the trophy being handed to Melbourne captain, Cam Smith. 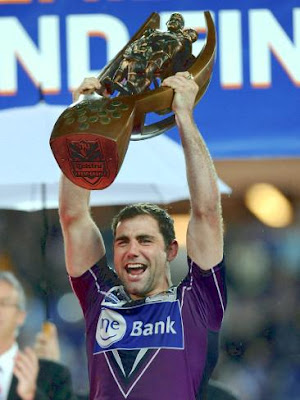 The empties are removed from The Stadium and The Prof retires, happy, proud and just a little bit wobbly but looking forward to next season already. Well done Melbourne. Premiers 2009.

Great game summary Prof (and suprisingly not as biased as the Channel 9 commentary), but I'm more interested in your whereabouts on Saturday... Did you in fact miss the Oktoberfest specTAPular, or did the Mash Eisbock impair my senses even more than I thought!?!

Great game - except for Channel Nong's 'blonde' moment in switching off transmission right at that point!

Sunday, drive with Dr and Mrs Lager and the Pilsner clan to Beechworth - 3 hours.

Meet Ben at brewery for a chat. He 'chats' at 6am. Had to settle for take aways.

Pay for previous six days and stock up some credits for a full Sunday in front of the telly with beers and Storm by cleaning house, minding kids and prepping dinner for Mrs Lager and babysitters to go to late night party.

Run restaurant - 6 hours
Pick up Mrs Pilsner from party and have one beer - 2 Hours.

Make up for missing Oktoberfest SpecTAPular by cracking Weihenstephaner Hefeweissbier at 3am.