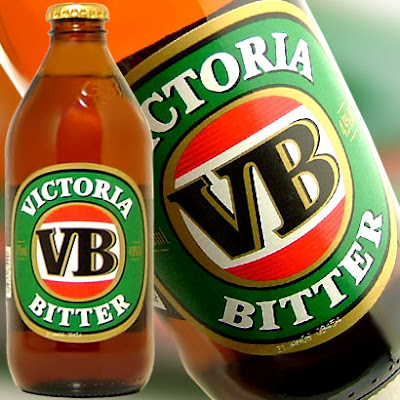 The latest instalment of the ongoing saga regarding Australia’s highest selling beer, Victoria Bitter, is up and running.

In previous posts I discussed the reaction to ‘changes’ to VB by its brewer, Carlton & United Breweries. These changes involved dropping the alcohol by volume level of the beer from 4.9% down to 4.8% last year and then again to 4.6% earlier this year. The uproar has been deafening with a conga-line of self confessed career VB drinkers threatening to switch beers because their favourite brew has turned to something worse than water. Some have claimed the courage of their convictions and have already switched brands.

So now we hear rumours that VB has not just changed its alcoholic strength (by a ‘whopping’ .03%) but has in fact become – DAH DAH DAH ... DAAAAAH!!! – a completely different beer! They reckon it has been switched for the 4.6% ABV Fourex, the flagship brew of Queenslanders! And not just a Queensland brew, but one which is brewed by the company’s brewing rival, Lion Nathan. There may be a small flaw in your theory, there, dickheads.

I have managed to procure two stubbies of VB – one of the old 4.8% variety and one of the new 4.6% beasts. I will conduct a strictly controlled secret experiment (secret because you can imagine the damage to my reputation as a Beer Bloke if I were to be seen drinking VB!) and I will post the results.

More importantly have you had your SNPA yet?

Well now, I WAS saving it for a special occasion, but since you had better plans for your trip to Melbourne on the weekend ... might have to save it now for a VERY special occasion.

PS; if any Beer Blokes readers want to see what 'tickers' do for fun, check out Tim's Beer Diary. Those 'Real Ale Arse Clowns' make such a bold impact and such articulate, profound arguments with only a few repeated words, it really is amazing.

But hang on I thought you were a big fan of VB 'back in the day'.

Didn't I see a photo of you in a gentleman's publication standing next to a huge erection... of green cans?

We all have our history and we all have dark secrets .. tho' I must admit I have very few regrets about the times in my youth that were fuelled by VB! I don't know if it would've worked to have been drinking 'proper beer' back then!